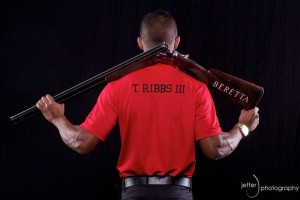 Wearing Tiger Woods’ iconic red-and-black Sunday colors, Theo Ribbs pursues a similar path in the world of sporting clays. This young, African-American shooter witnessed a great example of breaking down sports barriers via positive attitude and skill from his father, Willie T. Ribbs, the first black driver in the Indianapolis 500 (1991). At 23, son Theo is building his own brand with the help from family and other great athletes before him.

Opportunity to participate in a sport at an early age makes a significant difference. With his father enjoying sporting clays for off-the-track relaxation, Theo tagged along to push the target release button. By the age of 14, the young gunner’s skills moved him into competitive clays. Since graduation from high school five years ago, he’s been making a career as a competitive shooter and, most recently, as an instructor.

“I’ve heard from some shooters that teaching can take away from your game,” said Ribbs from his home in Dripping Springs, outside of Austin, Texas, “but I’m learning it helps my communication skills. By drilling others on what to do and the right way, it has reinforced the fundamentals in my mind. I take that out in my own practice.”

Theo Ribbs sets goals. The first one looming is to win the U.S. Open at the end of June, followed up with the first PSCA (Professional Sporting Clays Association) shoot at the same time.

“I want to win there and win as much as I can,” said Ribbs.

Next up is the National and World Championships.

“Winning the U.S. Open and earning the titles National and World Champion have been my goals since age 14.” In addition to striving for excellence in clays competition, Ribbs focuses on building his name and crafting it into a brand.

“When people hear my name, they associate it with my father’s. I have a lot of advantages when it comes to that.”

One might assume there’s a lot of pressure living in an accomplished father’s shadow, but Theo doesn’t look at it that way.

“My dad did his thing in his sport and I’m trying to do my thing in my sport. What he did definitely helped me get where I am in my career today. I might be in his shadow a bit, but without him I wouldn’t have gotten where I am.”

At 23, Theo Ribbs III is blazing a trail, building a brand that identifies his core character of competitiveness and a strong work ethic. A talented left-hand shooter, he doesn’t mind stating the fact with an it-ain’t-bragging-if-you-can-back-it-up demeanor.

“I use the advantages I have,” he said.

His father is his biggest fan and a great advisor—even when Theo’s Beretta shotgun is in its case.

“He reinforces staying on the right path,” said Theo, a natural hard worker who doesn’t need to be pushed to train or practice. “I’m really devoted to that.”

His father encourages him.

“He reinforces being smart and he doesn’t want me to make any silly mistakes.” 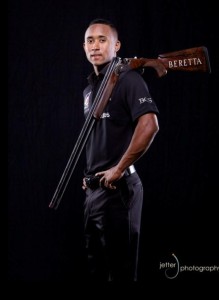 For now, Theo is intent on getting a job done and winning as much as he can.

“You’re your own driving force,” said Ribbs, as he looks the 2015 season squarely in the eye. “It’s you who’s the game changer. It isn’t the ammo or the gun that elevates your game. It’s you.”

As a junior and state-level competitor in Texas, Ribbs’ résumé boasts numerous champion titles and the trophy case holds plenty of wood—a strong start in what should be a long and successful career. Two top-10 finishes in the U.S. Open, including a second-place finish in 2013, fan the flames for this young competitor as national and world titles perch within his grasp.

“I just want to win as much as I can,” said Theo. “I enjoy it and plan to keep teaching along with competing.”