Within the handgun realm, shorter, more concealable guns are more difficult to shoot than are models with longer barrels. There are several reasons for this. A firearm such as this Colt 1911-type has a long sighting radius.

A longer barreled pistol has a longer “sighting radius.” This is the distance between the front and rear sights. In a handgun, the longer the sighting radius the more inherently accurate you’re likely to be with that firearm. Note I said the more accurate you’re likely to be, not the gun. This is because the longer the sight radius, the easier it is for you to keep the front and rear sights in proper alignment. The better you keep your sights properly aligned, the better the chances of you hitting the target where you want to. With short barrels, keeping the sights aligned may not be an overly difficult thing in and of itself, but any misalignment, however slight, will produce a bigger error on the target than that same degree of misalignment on a longer-barreled pistol.

A second reason you’ll find longer-barreled, medium- and full-sized handguns easier to shoot than their miniature counterparts is because they balance better in the hands. This can have quite a dramatic effect on accuracy. For example, as much as I love my Smith & Wesson Model 36, a five-shot revolver with a 1-7/8-inch barrel chambered in .38 Special (most people refer to these small, short-barreled revolvers as “snub-nosed” or “snubbies”), my buddy’s S&W Model 10, another .38 Special but a bigger revolver overall and one with a five-inch barrel, balances much better in my hands. The sights line up more easily and stay that way, and the gun just feels “right” in my hands, like its shape was made for the shape of my hand, a feeling I do not get with that little five-shot Model 36. While it is much easier to conceal that diminutive Model 36, between the longer sight radius and the better feel in my hands, the 10 is much more accurate. Indeed, when it comes to hitting targets past 15 yards, the Model 10 makes a mockery of the Model 36. 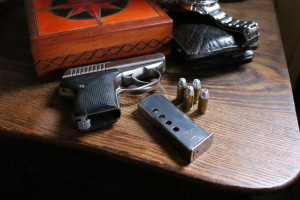 Small guns are great for carry but sometimes aren’t a lot of fun to shoot. Balance your practice with these guns with bigger models that can be easier to shoot.

Finally, if you took two guns like the snub-nosed S&W Model 36 I just talked about and its full-size counterpart the Model 10, and loaded both with the exact same ammunition, you will find the larger, longer-barreled Model 10 to be the one of the pair most fun to shoot. This is especially true because it will have less received recoil and less muzzle jump.

Now this is not to say that small guns, especially short-barreled small guns, are inaccurate. They’re not. But they are more difficult to master shooting well, and that can give the impression they’re inaccurate. It’s also not to say that you won’t have any fun shooting a small gun. Many of them are a ball to shoot, and you can really learn to enjoy the challenges they present as you refine your skills and become a more accomplished shooter. But until you’re there, as a person new to the shooting sports, what many in the know are coming to recommend to you is to buy two guns, the small gun you want to carry and a medium- or full-sized gun ether in the same caliber as your carry gun or one chambered in .22 LR. While you absolutely want to and absolutely should practice with both, spend more time perfecting your sight picture, trigger control, breathing and other target skills with the larger, easier to shoot gun. Nobody wants to practice with a gun that’s not a lot of fun or is even slightly uncomfortable to shoot—and if you don’t want to practice with such a gun, the bottom line is you won’t. So get your fun in and work on perfecting your skills the majority of the time with a gun you do like to shoot. Practice this way and, over time, you will find that the small gun won’t really be all that difficult to shoot anymore. This is because your skill set will have improved enough to master the smaller gun, too, and you will have gotten to that place without struggling through the added recoil or the more challenging sight radius.

Tip: In my opinion, a shooter new to the pistol world is best served by a long-barreled pistol in .22 Long Rifle when it comes to perfecting the skill set necessary to becoming an accurate marksman. The ammunition is inexpensive, the recoil is virtually non-existent and the guns themselves can be seriously accurate. A .22-caliber pistol can allow any shooter, but especially those new to the sport, to develop the coordination and muscle memory required for accurate pistol shooting, but without developing bad habits—flinching, slapping at the trigger, etc.—that can easily be magnified when the calibers get larger and the barrels shorter. There are even varieties of subsonic .22 LR ammunition that will make the pistol’s report very quiet, making these rounds an additional tool that can help avoid the flinch that can be linked to loud handguns.

SHARE THIS
I N D U S T R Y
RELATED NEWS
Suicide Prevention Month Reminders and Resources for Gun Owners
Firearms are used in 50% of all suicides in the United States. Understanding this, NSSF, the American Foundation for Suicide […]
READ MORE
New Ammo Coming to Stores in 2022
2021 was all about keeping pace with demand. This year, there is a whole new crop of innovative ammunition products […]
READ MORE
5.4 Million First-Time Gun Buyers in 2021
The National Shooting Sports Foundation® (NSSF®), the firearm industry trade association, revealed that at least 5.4 million people purchased a firearm […]
READ MORE
We use cookies to ensure we give you the best experience on our website. By clicking "Accept" or using our website, you consent to the use of cookies unless you have disabled them. ACCEPT
Privacy & Cookies Policy