McKenna Dahl may not be a shooting name you know quite yet—but you will.

The International Paralympic Committee named Dahl one of the “Top 10 Para-Athletes You Should Like Before 2016,” noting, “Expect her to be huge come Rio 2016.” That’s tall billing for this bubbly 18-year-old, who moved to the Olympic Training Center to train as a Resident Athlete only in early 2014 after graduating from high school. She’s clearly on her way and, in fact, she’s already made history by being the first female to earn a shooting Paralympic quota for the United States.

“My scores have gone up a lot since I’ve been here [at the Training Center], at least five points in each event. I think I can make a lot of finals in my events now, if I can shot that way in a competition, and that’s exciting,” she said. “It’s crazy to think the Paralympic Games are less than two years away!” 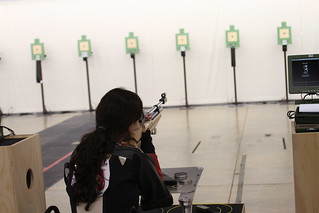 “A lot of people see people with physical disabilities and are surprised they can do something like shooting,” said Dahl, who was born with amyoplasia, a rare, non–progressive muscle disorder characterized by an overall lack of muscular development, loss of joint motion and deformity of most joints. In the SH2 classification in which Dahl competes, an athlete uses a spring-mounted shooting stand to support the weight of the air rifle.

Dahl got her start in the sport in the summer of 2009, while attending Camp Access, a summer camp for kids with disabilities in her home state of Washington. She had played basketball and other sports, but when the camp director took the 12-year-old campers to a shooting range, Dahl said she discovered something in shooting those other sports didn’t offer.

“I could be really competitive [in shooting], but also competitive with myself,” she said. “I could challenge myself to be better versus trying to do better as a team.” 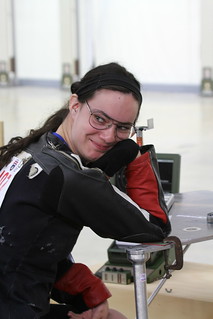 Dahl was hooked. After her first sectional—her very first competition, in fact—Dahl was contacted by the NRA, which told her she had qualified for a Paralympic camp at the Olympic Training Center based on her scores. “That was pretty cool!” she told us. From there, Dahl has competed in numerous competitions from national events to IPC World Cups around the globe, including the IPC World Championships in Suhl, Germany, last year where she earned her Paralympic quota.

“All my shooting adventures and experiences have molded me into the person I am today,” Dahl said. She is a former Brownell Junior Ambassador and a participant in the NRA’s Y.E.S. (Youth Education Summit) program. “Shooting has taught me valuable life lessons, and I will only continue to learn as my shooting career progresses.”

For someone who is thinking about taking up shooting, Dahl offers some simple advice.

“Work hard and stick with it. Shooting is a sport that you never stop learning from. Don’t get discouraged when things don’t go right. Just pick up the gun and keep trying.”

Beyond her shooting career and Paralympic Games aspirations, Dahl hopes to one day become a lawyer. She attends classes online between training sessions.

“I had already completed my associate’s degree when I graduated high school last year,” she said. “I hope to job shadow a local lawyer to see if it’s something I’d like to pursue. If there’s not, I’d like to work with Wounded Warriors or children in some way.”