There are, as you might suspect, numerous sports one can shoot with a Colt 1911 or one of its many current day variations. But if you want to stay in keeping with the history of the gun itself, look no further than National Rifle Association (NRA) sanctioned bull’s-eye events.

Sounds simple? Well, not so fast. A sanctioned NRA bull’s-eye match is actually a three-gun match. Though there are variations on the total number of rounds that can be fired in a match, in most formal matches, competitors will shoot the 30-shot slow-fire, timed-fire and rapid-fire relays first with a .22-caliber handgun, then with a handgun .32-caliber or larger and finally for a third time with a .45-cabliber handgun, for a total of 90 shots. Now, a .45-caliber handgun is, of course, a caliber larger than .32-caliber so most competitors use just two guns. Some even use just one, especially when they’re shooting a Colt 1911 model pistol, for which .22-caliber conversion kits are available as well as the old Ace models, which were identical to the original 1911 but chambered for .22 LR instead of .45 ACP. (Colt Model Ace pistols, by the way, are highly collectible and much sought after for their accuracy). 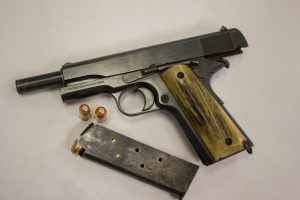 A Colt 1911 in .45-caliber shown with its slide locked open and the magazine out of the pistol’s grip. You can shoot .22 LR in this gun with a separate conversion kit. Photo courtesy Phil & Suzie Massaro.

Why would having just two guns or even a single gun that can accommodate both .22 and .45 ACP be important in a competition like this? Having a gun with the same weight and grip available to shoot across such a long match can help a shooter be more consistent. This is especially crucial in NRA sanctioned bull’s-eye, where all 90 shots are fired with just one hand.

According to the website www.bullseyepistol.com, the NRA sanctions more than 42,000 bull’s-eye matches every year, and that means if you research the local clubs in your area, you’re bound to find at least one (and likely more than one) that holds these matches. When you find the first match to go to, you might just want to go to watch. It’s pretty exciting to see a dozen or more shooters on the line, targets turning and disappearing, and the pressure of the timed- and rapid-fire relays. You’ll see the stance the competitors take and the guns they use—you can use either a revolver of semi-auto, though most will use a semi-auto of the Colt 1911 type for the number of rounds it holds, which can be a time-saver during the timed- and rapid-fire relays—plus all the specialized gear the really serious competitors have on hand, such as special gun boxes, spotting scopes and more.

A single-stack magazine for a Colt 1911 in .45 ACP. Photo courtesy Phil & Suzie Massaro

Don’t let a fancy gun chest or spotting scope scare you off from competing! Like most firearm competition, all you need to get started are a gun (or two in this case) and ammunition. On your first match, tell the match director and range official that you’re new to the sport. They’ll go over the rules and range safety information, and they’ll likely let the other competitors know you’re new, too. That’s a good thing, because the majority of competitors are very willing to help newcomers, even if it comes to shooting on a different relay than you so that you may borrow their gun. Yup, it’s that friendly, that easy.

If you get bit by the bull’s-eye bug and love the shooting perfection the sport demands, then you can set your sights (pun intended) on the ultimate in NRA sanctioned bull’s-eye, the Camp Perry National Rifle and Pistol Matches. Held each summer since 1907 at the Camp Perry National Guard training base, in Ohio, on the shores of Lake Erie, the National Rifle and Pistol Matches are a more than month-long competition of every accuracy sport the NRA sanctions. This includes junior competition and shooting camps, high-power rifle, small-bore rifle, long-range rifle and even vintage firearms competition. Camp Perry is where the very best marksmen in the world gather each year, and there are some very famous trophies at stake, such as the Mayleigh Challenge Cup  (for the champion .22-caliber pistol team, a honor the U.S. team has won more than any other), the Wimbledon Cup (established in the 1870s and awarded today to the winner of the 1,000-yard high-power rifle competition at Camp Perry) and the twin Whistler Boy trophies, one awarded to the Junior State Association High Power Rifle Team winner, the other to the Junior Smallbore Rifle Team winner. No matter which discipline you shoot at Camp Perry (some people actually stay for the entire set of matches, which run from early July through early August—now that’s a lot of shooting!) there’s immense fun to be had. There are shooting clinics, group practice events, celebration banquets both for competitors and the hundreds of volunteers who dedicate many hours to running this extraordinary and historical set of matches, and the many award ceremonies that shine the light on a handful of the world’s best shooters. And no matter where you turn among the 6,000 attendees to this historical setting, there’s a smiling face ready to help you with your gear, your shooting position or anything else you need. That’s the power of bull’s-eye.

SHARE THIS
I N D U S T R Y
RELATED NEWS
Improve Your Shotgun Shooting with Instinct and Muscle Memory
Learning to turn off your brain to stop “thinking about the shot” will help you break more targets. Here’s how […]
READ MORE
Celebrate National Shooting Sports Month this August
Whether you’re a first-time gun owner or experienced, here are 8 ways to enjoy the target shooting sports and special […]
READ MORE
5.4 Million First-Time Gun Buyers in 2021
The National Shooting Sports Foundation® (NSSF®), the firearm industry trade association, revealed that at least 5.4 million people purchased a firearm […]
READ MORE
We use cookies to ensure we give you the best experience on our website. By clicking "Accept" or using our website, you consent to the use of cookies unless you have disabled them. ACCEPT
Privacy & Cookies Policy