The Best .22LR Pistols and Revolvers

The 132-year old .22 LR cartridge has been loaded into all kinds of pistols, rifles, and revolvers through the decades. It predates most firearms today’s shooters have ever handled, let alone shot, yet it’s still as popular and useful today as it was when it was invented — in fact, because of modern manufacturing techniques and materials, .22 pistols and .22 revolvers are better than ever. It’s a 159-year-old cartridge with puny ballistics that’s no good as a self-defense round — yet the .22 continues to be one of the most popular gun chamberings ever. Here’s why.

The light kick and excellent short-range accuracy of the popular rimfire cartridge has long made it a great choice for .22 pistol shooters, whether as a less intimidating way to learn to shoot, as a high-end competition gun or as always ready varmint hunter. While its generous rim made it a natural for .22 revolvers, the cartridge has also seen massive popularity chambered in autoloaders, beginning with John Browning’s Colt Woodsman.

Depending on what type of shooting, hunting, training, or just plain plinking appeals to you, a .22 revolver or a .22 pistol may be the right choice. Most .22 revolvers offer a capacity of six shots – or more. In fact, some on our list pack 10 .22 rimfire cartridges into the cylinder thanks to the small diameter of the .22 LR cartridge. The same capacity benefits apply to pistols – even compact models can easily fit ten shots in a magazine. And, just like you’ll find with larger centerfire pistols and revolvers, you can choose from a wide variety of styles and action types to suit your preference. Perhaps the best part is that .22 LR ammunition is far more budget-friendly than larger centerfire ammunition, so a day at the range won’t break the bank.

Let’s take a look at some of the best, most useful, and most enduring .22 pistol and .22 revolver designs on the market.

These pistols have dominated the .22 autoloader pistol market since the original Ruger Standard was introduced just after WWII. 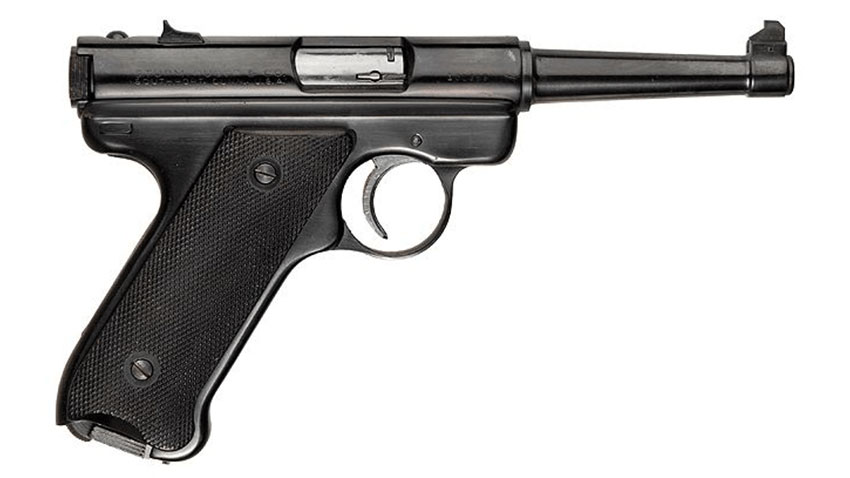 An example of a Ruger Mark I .22LR pistol.

The Ruger Mark series not only stands as one of the best rimfire pistols ever made, but it’s also the gun that started Sturm, Ruger & Co. back in 1949.

Bill Ruger, a self-taught engineer and entrepreneur, designed the Ruger Standard pistol using the German Luger P08 and the Japanese Baby Nambu pistol for inspiration. Ruger had acquired a Nambu from a U.S. Marine who had brought it back from the Pacific Theater in WWII.

Utilizing the gun’s silhouette and bolt system, Ruger produced the prototype of what would become the Standard in his garage. That gun would be the progenitor of a line of pistols that are still in demand today. Once Ruger got the financial backing he needed from Alex Sturm, the company was born and the Standard pistol went into production, becoming a favorite of target shooters and hunters who were attracted to its looks, accuracy, and affordable price tag.