As much as I like a semi-automatic pistol such as the venerable Colt Model 1911 or the Walther PPK, at heart I am a “wheelgun” man. I thoroughly enjoy the way revolvers handle, the reliability of their design and the cartridges they fire. Revolvers are generally stronger than the semi-automatics, and while their capacity is limited to five, six or seven shots (and sometimes 10 when chambered for .22-caliber rimfire rounds), semi-automatic pistol magazine capacity restrictions in many states make the playing field between the two more even.

There are certain names synonymous with revolvers. Colt’s was the first name associated with the revolving handgun. And then came the firm of Smith & Wesson. Horace Smith and Daniel B. Wesson hung out their collective shingle in 1852, and by 1860 demand was so high for their firearms that the facility needed to be expanded. Though originally S&W made single-action revolvers, it was the firm’s double-action wheelguns that made the company’s name. To this day, the S&W name remains a powerhouse in the double-action revolver game.

A double-action revolver is one that can be fired by either first cocking the hammer with the user’s thumb and then pulling the trigger or by simply pulling the trigger in a longer, heavier trigger pull that both cocks the hammer and releases it to fire the gun. Two ways to fire, thus the term “double-action.” A single-action revolver, on the other hand, requires that the hammer be pulled back for each shot. One way to fire it, thus “single-action.”

S&W double-action revolvers are designed to have a “cylinder,” which holds the cartridges. With each cock of the hammer, that cylinder rotates to position a cartridge in one of the cylinder chambers in line with the barrel. This cylinder swings out to the left side of the handgun for ease of ejection and speed of reloading. The “cylinder release” that allows the cylinder to swing free from where it is locked in place in the revolver’s frame is located slightly higher than where a right-handed shooter’s thumb would naturally sit when gripping the gun to fire. To activate it, the user pushes forward on the release, freeing the cylinder to swing out with a little push in it from the right side. Smith & Wesson’s Model 10 is one of the firm’s classic .38 Special K-Frame revolvers.

My first experience with a Smith &Wesson revolver came from shooting my dad’s Model 36, a five-shot, square butt “J-Frame” with a 1.875-inch barrel and chambered for the famous .38 Smith & Wesson Special. Quick handling and surprisingly accurate for having such a short barrel, the little revolver was easy to conceal and utterly reliable. I liked it so much I purchased my own well-worn 36, essentially identical to Dad’s minus some bluing and with the addition of Pachmeyer rubber grips that fit my long fingers better.

There are great models on each frame size. The sidearm that “Dirty Harry” Callahan made famous in the movies, the N-Frame Model 29 was what Harry touted as “the most powerful handgun on earth,” chambered for the .44 Remington Magnum. That 1971 movie would send S&W Model 29s flying off the shelf. Today, they still make a fantastic choice for a self-defense or hunting handgun. The medium-sized K-Frame Model 10, chambered in .38 Special, has the privilege of being the best-selling revolver of the 20th century, with more than 6,000,000 sold. It was a staple of the law enforcement community until most transitioned to semi-automatic firearms, and it was issued to both U.S. Navy and Marine aircrews during the Second World War. The Model 17 is also built on the K-Frame but is chambered in the .22 Long Rifle cartridge. The Model 17 makes a great pairing with the Model 10, so you can practice with the less expensive rimfire ammo in a handgun based on the same frame as the bigger centerfire.

The Model 29 from S&W was made forever famous by Clint Eastwood’s “Dirty Harry” move character.

The same could be said of the more modern offerings from S&W. The Model 617 (in .22 LR) and the Model 67 (in .38 Special) are also both K-Frames but with updated synthetic grips and stainless steel finishes. J-Frame Models like the 36 I learned on come in a dizzying variety these days, including those with built-in lasers, bobbed or concealed hammers (good choices for concealed carry), ultra-light frame materials and different external finishes, and continue to be popular choices for concealed carry and home-defense, as well as for use as a backup gun for law enforcement. The Model 686, an L-Frame revolver slightly larger and more robust than a K-Frame, is a favorite with those who like to shoot the more powerful .357 Magnum cartridge. Dirty Harry’s original Model 29 is as popular as it ever was, but S&W’s N-Frame revolvers are also now available in .45 ACP and specialty .357 Magnum configurations. And on the far end of the spectrum, S&W’s mammoth-sized X-frame revolvers, chambered for the equally behemoth .460 S&W and .500 S&W cartridges proprietary to the Massachusetts gunmaker, are capable of taking on some of the world’s most dangerous game when in the practiced hands of a skilled hunter. 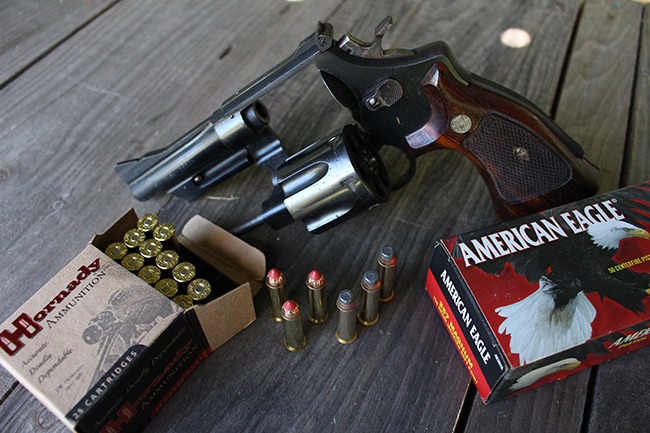 The Model 28 is a S&W N-Frame revolver chambered in .357 Magnum. It was often referred to as the “Highway Patrolman” model.

The many options from just this one gunmaker make exploring the world of revolvers and the fun you can have with them well worth the effort. Even a quick exploration of S&W’s website will show you that this company has gone the distance in developing a revolver to suit nearly any competition, hunting and personal-defense use—not to mention the dozens and dozens of options for those like me who simply love the practicality and ease of operation a wheelgun provides. So give a revolver a “spin” today and discover the great fun and many uses one can provide. You’ll be glad you did.