Let’s take a look at what makes a shotgun a shotgun.

If you rely on Hollywood for your information, a shotgun can never miss and is capable of knocking a 1970 Pontiac GTO clear across Hazzard County.

In reality, they’re not quite that impressive, but a shotgun is one very versatile gun. Competition, recreation, hunting and home defense — a shotgun can do it all.

Before we get into types of shotguns and their various uses, let’s talk about what a shotgun is. A shotgun used to be a gun with a smooth (non-rifled) bore that fired multiple pellet projectiles. As with everything, the lines got blurry because gun people like to invent new stuff. Now some shotguns can fire single projectiles, have rifled barrels and are available as handguns.

For purposes of this discussion, let’s consider a shotgun as a shoulder-fired gun that has a smooth bore and is intended to fire a shell loaded with multiple pellet projectiles. Even with this basic definition, the versatility of a shotgun is evident.

The versatility comes from shotgun ammunition, commonly called shot. Shot type is identified by number. The higher the number, the smaller the pellet size. For example, 000 buck shot shells have pellets that measure .36 inches in diameter. That’s the same diameter as a .357 Magnum bullet! Number 9 shotgun shells have a gazillion tiny pellets that measure .080 inches in diameter. There are about a dozen options in between. If you require longer range and more power, you can use a shell with fewer, but larger and heavier pellets. If you’re shooting at clay targets or bird hunting, you can use a shell with many smaller and lighter pellets. Using the same gun, you can customize your ammo choice for the job.

We need to talk about one more thing before we get into types of shotguns — choke. Think of a choke tube as a nozzle you put on a garden hose. If you put a small nozzle on the end, the water stream gets narrower and shoots farther. It’s the same thing with a shotgun choke tube. For example, a “full choke” tube constricts the diameter of the muzzle, causing the pellets to compress into a tighter cloud. 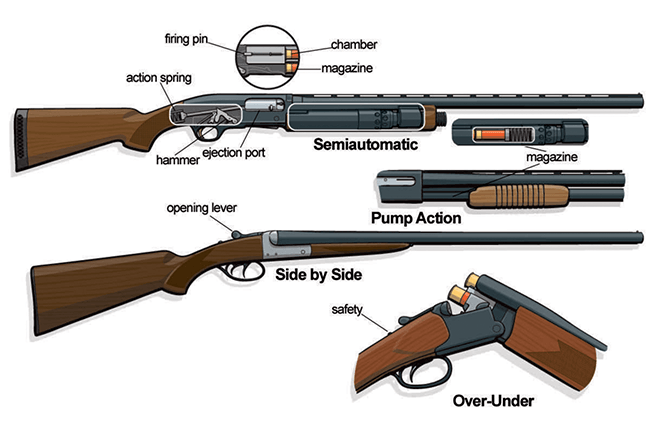 There are three common types of shotguns: break action, pump and semi-automatic. We’ll lump the more unusual designs into the “other” category. Let’s take a look at each.

A break action is the simplest shotgun design. The “break” part simply means that the barrel (or barrels) hinge open from the receiver and stock. To load a break action, you simply dump the shotgun shells into the chamber end of the barrel. After firing, break the action open again and pull out the shells. Some break actions have an “ejection” feature that flings the shells out automatically when you open the gun. This looks exceptionally cool at the range, especially if you do it with a nonchalant look. Break actions usually have one or two barrels. The most common styles are double-barreled shotguns. The barrels may be oriented side by side or over and under. You’ll see side by side styles on classic hunting shotguns, while over and under designs are more popular in the clay shooting sports like skeet, trap and sporting clays.

The benefit of a break action design is simplicity. It’s easy to load and unload, and there are no fancy mechanisms to operate during the firing sequence. When ready to fire, make sure the safety is off and pull the trigger. That’s it! On the downside, you only have one or two shots before needing to reload.

Pump action shotguns use a single barrel, but store multiple shotgun shells in a tube under the barrel. With most models, you load the magazine tube by pushing a number of shells forward against an internal spring in the magazine.

Loading a shell into the chamber is a manual operation completed by “pumping” the foregrip backward towards the stock, then pushing it forward again. The pulling action allows one shell to move into the receiver, and then the forward motion raises the shell to the barrel and pushes it into the chamber. After firing, the reverse pump withdraws that shell and repeats the loading sequence with the next shell in the magazine. With a pump gun, you control all ejection and feeding. Pump shotguns are popular for hunting as you can load more than two shot shells in the magazine. You won’t see them as frequently on the competition fields due to the need to pump the action between shots. However, in sports like trap shooting where you shoot once per turn, you’ll see plenty of folks using a pump shotgun.

The “automatic” part of this action means that the ejection of the spent shot shell and loading of a new one into the chamber is automated. There is no need for the operator to work a pump, lever or bolt between shots.

Most semi-automatic shotguns take advantage of gas operation. When you fire a shot shell, a huge volume of rapidly expanding gas expels the shot down the barrel. It’s like a politician in front of a microphone except, a lot more productive. Part of the gas is bled off through a small hole in the barrel. The gas pressure operates levers, ejectors and lifters that fling the spent shell out and push a new one from the magazine into place. It’s like a pump shotgun that operates itself, except nothing moves on the outside. Like a pump shotgun, most semi-automatic shotguns have a tubular magazine under the barrel for extra shot shells.

Some innovative designs don’t use gas to perform the ejection and loading, they use inertia. Borrowing from that brilliant Newton guy’s principles, the equal and opposite reaction forces are captured and leveraged to operate the shotgun. You know what? If you have a shotgun of most any type, don’t let equipment intimidation keep you from enjoying shotgun sports and activities.

Do you have a budget pump action shotgun? No worries, you can take it to shoot trap, sporting clays and even skeet. Some shots, like fast double targets, might be a little harder, but that’s no reason you can’t try them out. Heck, I have a Winchester 9410 lever action shotgun chambered in .410 bore. It looks exactly like one of those cowboy rifles you see on Wagon Train or Gunsmoke. I take it to the trap range and sporting clays fields all the time, even if people think it’s silly. Why? Because FUN!

With that said, certain types of shotguns are better for certain shotgun activities. For example, a double barrel over and under shotgun is great for sporting clays. Why? You can fire two shots in quick succession for stages with multiple targets. You can put a different choke tube on each barrel to optimize one barrel for close targets and the other for far ones – a common sporting clays course challenge. You’ll also see break action over and under shotguns at the skeet range for similar reasons. Some of the stations launch two targets simultaneously; so two quick shots are in order. Perhaps most importantly, break action designs are easy to open, unload and move in a safe condition. With the shotgun sports, you’re constantly moving from station to station, so ease of unloading, moving safely and reloading is a big time saver. For a little more money than a pump gun, you can experience the joys of a semi-automatic shotgun. The rapid-fire capability gives you more flexibility with hunting, home defense or shotgun sports. It’s not at all unusual to see semi-automatics in trap, skeet or sporting clays.

While there are plenty of shotgun options out there, the most important thing is not to let your current gun limit what you do with it. Do you have a Remington 870 pump shotgun sitting in the safe? Take it to a shotgun club and try out trap, skeet or sporting clays. There’s no reason you can’t start expanding your shotgun shooting horizons with the equipment you already have. If you like it, and want to optimize, you can always upgrade or add a new gun later.

Get out there and shoot!